When you look back on life, is it the unexpected moments that often stand out more than the planned? I think so.

Of course, there are exceptions. There are always exceptions. But, in general, I think the stuff we don’t see coming makes for a more interesting story to tell and remember.

Thinking back on my travels, I compiled a list of favorite random travel memories – some magical, some quirky, all unexpectedly unforgettable.

Hiking Slieve League (Co. Donegal, Ireland) was itself a grand and memorable adventure. But, it was also planned. What wasn’t planned? The two sheep that blew past me on the descent back to the car. You see, to park at the base of the cliffs requires first exiting your car, opening a sheep gate, driving through said gate, then latching it shut. Nearing the car park after a lengthy hike, it was clear someone had forgotten to close the gate. These two sheep noticed it, too. They full-on sprinted toward that gate with wild abandonment – the word FREEDOM ringing in their ears, no doubt! Then, as if afraid their delinquency would be found out, they slowed to a cool, casual stroll the precise moment their wooly bodies passed through the gate. If sheep could whistle nonchalantly, they would have. To this day, I can’t say ‘freedom’ without picturing this scene in my head.

A TEXT FROM DAD

During my Sant Jeroni hike in Spain, I could not stop texting mountain views to my family. But, per the six-hour time difference, no one responded until I’d already finished the hike. It wasn’t until I was sardined inside a cable car with twenty-nine strangers that my phone vibrated – a text from dad. Ever loyal to his Michigan hometown roots, he replied to my photos with, “Union City has nice views too.” Now, I don’t ever use LOL, but here, it would actually be accurate. Because I legitimately laughed OUT LOUD… in a packed, quiet cable car… before I could stop myself. Everyone stared. I almost laughed again, but instead smiled at the guy next to me, pointed to my phone, and said, “Text from my dad.” LOL

FIRST TIME IN A TAXI

My first-ever taxi experience occurred quite by accident in Cork, Ireland.

Has your rental car ever disappeared? In a foreign country? That’s what happens when you accidentally park in a bus zone and venture around a city for several hours. Come back and… gone. But where, oh where, are delinquent cars taken in Cork?? Hail a cab, and the driver will know. True story! He was the nicest cabby and made my first taxi ride SO pleasant. Paying $200 USD (cash!) to free the car? Not so much.

If you read my Blowing Rocks post, you know the story. If you didn’t (yet), here’s a recap. I left Sarasota at 3 am one night, drove across the state, and caught the sunrise over the Atlantic. At Blowing Rocks. After exploring the rocks for, oh, two hours, I headed back to my car. That’s when I saw it. A just-hatched baby turtle crawling toward the sea. My heart melted all over the sand. I was mush. As soon as the waves overtook him, I quickly scanned the beach for siblings. Sure enough, I spotted TWO more babies making a beeline for the water. I felt like a proud mama, cheering them on – the only witness to this miracle! I’m pretty certain at least a few drops of my melted heart went out to sea with them.

Back in January, my weekend trip to Paris included a quick, planned pit stop at the Louvre. I didn’t have time to venture inside – because I would’ve stayed ALL day. But, I still wanted to see that pyramid with my own two eyes. After wandering the courtyard for a bit, I was ready to move on when I spotted a guy surrounded by pigeons and onlookers. Instagram story gold! I thought, and quickly took a video to post. While recording, though, he walked right toward me… and, just as I reached the 15 second max, he grabbed my free gloved hand and poured bird seed into it! Instantly, I was miss popular with the bird crowd. Two pigeons wasted NO time staking claim to the food in my palm. And, somehow, I managed to snap a few photos without disturbing them.

It was one of those bizarre, in-the-moment, appreciate life sort of experiences. I don’t know the man’s name or if he even spoke English, but I’m grateful he picked me out of the crowd. Thanks to him, my Louvre visit was somehow more special than if I’d seen the art. 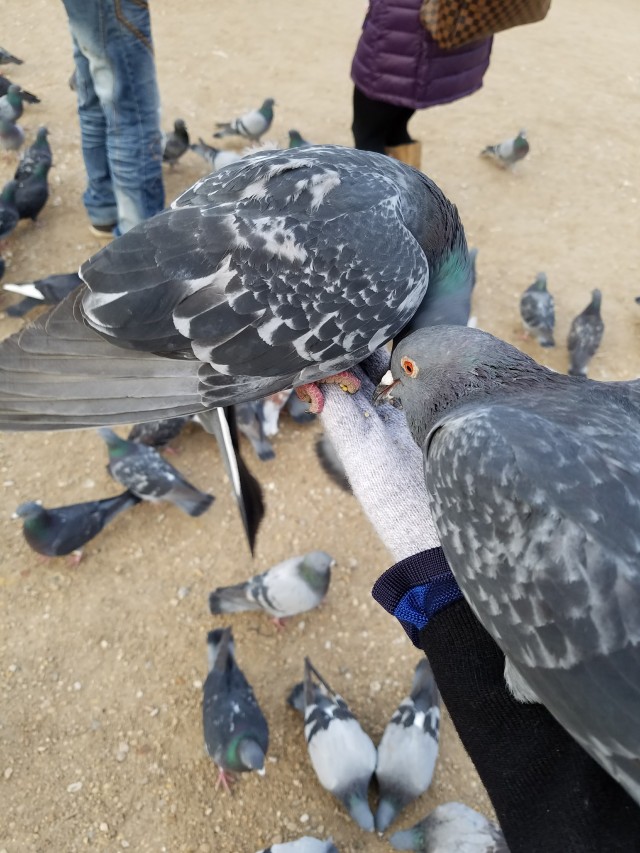 What are some of your favorite random travel memories? Feel free to reminisce with me below!