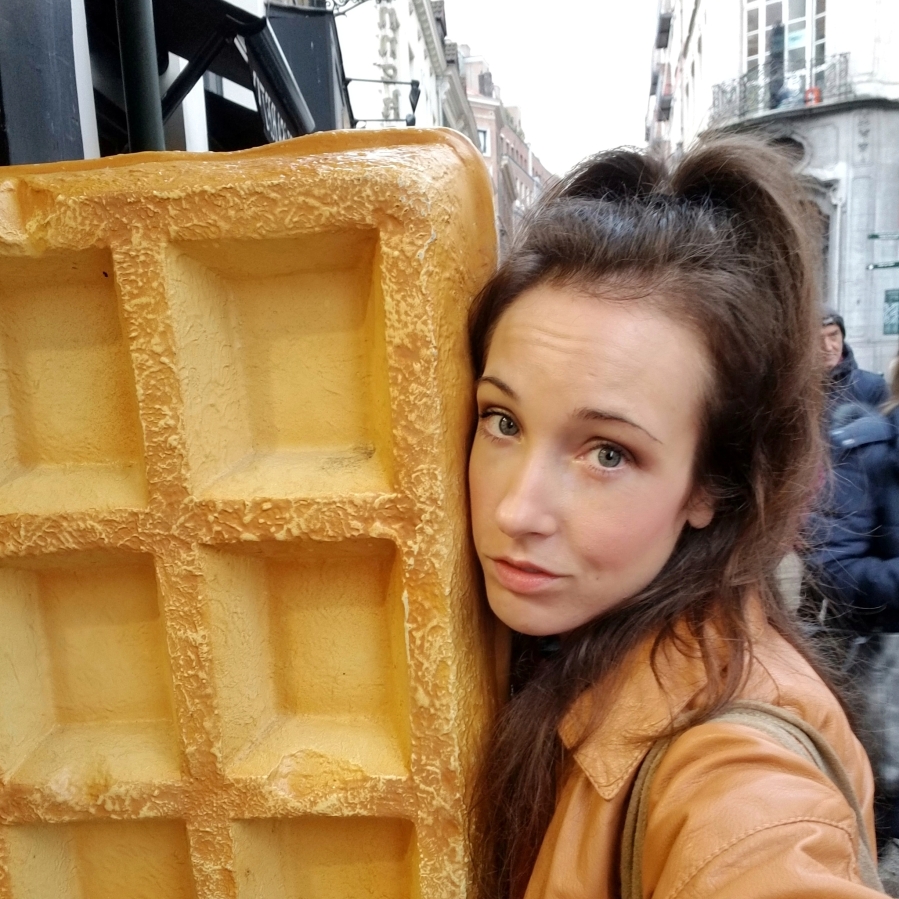 I love Brussels. The sprouts and the city.

Brussels sprouts can be a polarizing topic, though, so I’m gonna stick with Belgium’s capital.

Whenever I visit a new city, I’m curious to find an underlying element that sets it apart from any other place I’ve experienced. What struck me about Brussels is its juxtaposition of refined, detailed architecture and quirky, artsy sense of humor. And, you know? It felt very me.

Because ME is a detail-oriented, old soul with a penchant for creativity and an unexpectedly random silly side. So, if I were a city… pretty sure I’d be Brussels.

And now, I’m gonna sell you on visiting Brussels with these three categories: architecture, cartoons, and waffles. Intrigued?

Back in my middle school years (and maybe some of high school) I entertained the idea of becoming an architect. I only tell you this to emphasize that I pay attention to buildings maybe more than the average person. I also minored in Art History back in college, so I basically just can’t help it.

Brussels’ Grand-Place is indeed grand – a cobblestoned market square with architecture that dazzled me from all angles. Its facades are a mish-mash of gothic, Renaissance, and Versailles-esque opulence, complete with gold accents. Yes. GOLD. There’s a reason it’s a UNESCO World Heritage site, people.

And, the mish-mashy, architectural details aren’t limited to this section of the city either. Get out and explore, and you’ll see them – from the classical columns of the Brussels Stock Exchange to the distinctive, Art Nouveau Old England building to the triumphal arch of Parc du Cinquantenaire.

While architecture could fit into the art category, Brussels is probably more renowned for its comic and cartoon culture. Did you know the Smurfs originated here? I didn’t before my visit. While walking around the city, I kept seeing all this Smurf stuff – and it wasn’t till I joked in my Instagram stories about Brussels’ obsession with Smurfs that a friend set me straight. Good to know!

But, well before the Smurfs, there was The Adventures of Tintin, a comic strip created by an artist known as Hergé in 1929. It was this comic’s popularity that paved the way for what is now a city brightened by cartoon murals around almost every corner. There are so many, in fact, that the Belgian Comic Strip Center (a real place!) created the Comic Book Route in 1991. This handy guide includes a list of murals, a map, and images of each one. You can bet I used it while planning my trip, to plot out the murals I wanted to see in person! 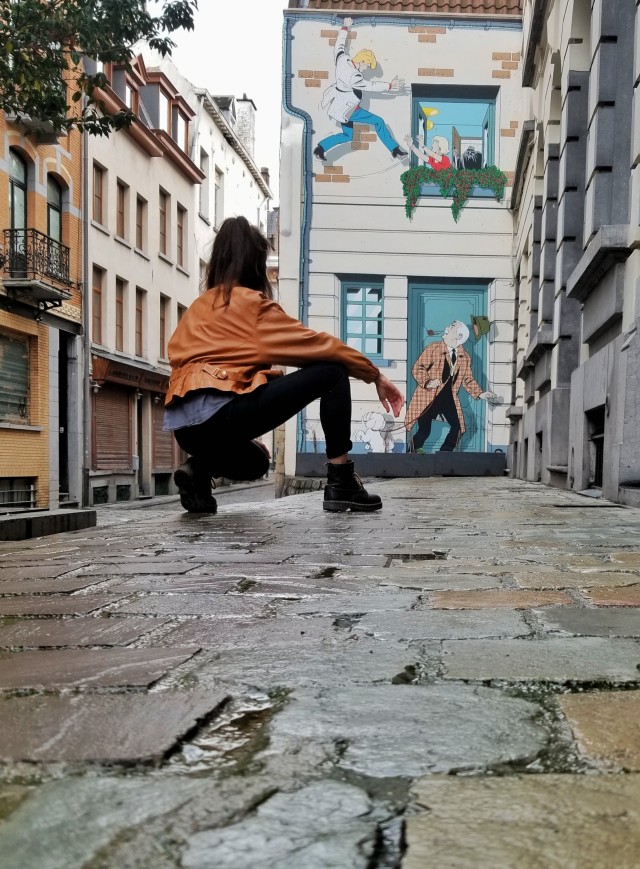 The playfulness of Brussels’ art scene isn’t limited to comics, though. Also spread across the city are three peeing statues. Yes, peeing. A boy (Manneken Pis). A girl (Jeanneke Pis). And a dog (Het Zinneke). Of course, these aren’t cartoons, so consider this a bonus reason to visit.

Manneken Pis draws the largest tourist crowd, and seems a sort of unofficial symbol of the city. You can buy miniatures of this statue, and I even saw a nearby waffle shop with a giant replica of the peeing boy incorporated into the window display. How that sells waffles, I don’t know. Even Jeanneke Pis is popular with the street tours; but, my favorite of the three was Het Zinneke – roughly translated “stray dog” – on an unassuming street corner. There were no people gathered around this bronzed furball, at least, none on purpose. And that just made me love it more! You can search for all three on Google Maps for exact locations, and fun photo ops. 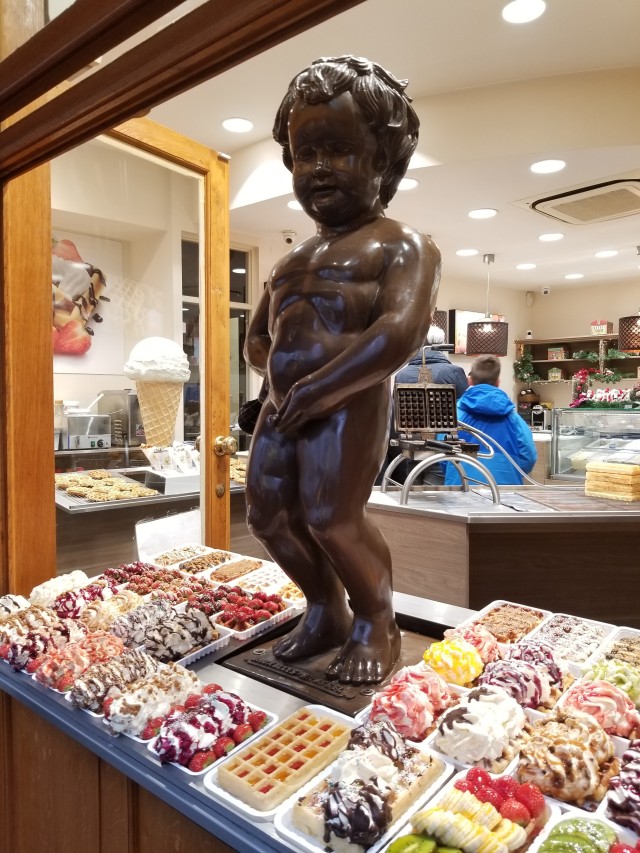 No doubt you’re familiar with Belgian waffles. And, in Brussels, they are EVERYWHERE.

While researching my trip, I learned that there are two types of Belgian waffles – Brussels and Liege. I also noticed that people seem rather opinionated over which is the best, whichhhh I thought was sorta silly. Aren’t waffles just waffles??

Well, I ate my words (literally) the moment I tried a Liege waffle. Friends, I was awakened. Enlightened. TEAM LIEGE. If you haven’t tried a Liege-style waffle, believe me when I say that not all waffles are created equal. While Brussels waffles are perfectly rectangular, fluffy, and usually piled high with toppings, the Liege didn’t even need syrup! With its crisp, caramelized, uneven edges and a densely doughy center, every bite was heaven in my mouth. Yes. I now believe that there will be Liege waffles in heaven. Only the best from God, right?

But don’t just take my word for it. Try at least one of each – a Brussels and a Liege – and decide for yourself. With more per capita waffle shops than probably any other city in the world, the hardest part might just be deciding which one(s) to choose… orrrrrr, trying not to eat waffles for breakfast lunch and dinner…

Okay, so are you sold? Do you wanna visit Brussels? If the waffles didn’t convince you, I don’t know what will!

And, if you have visited Brussels, what would you add to this list?