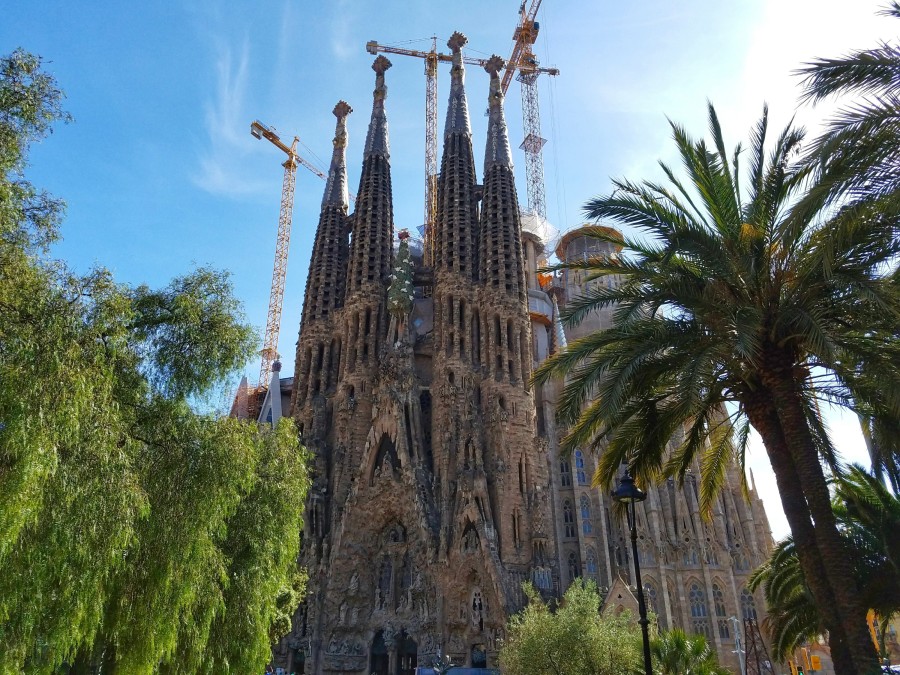 I thought crossing #1 off my bucket list would appease my wanderlust for at least a little while. It certainly wasn’t wishful thinking; I just assumed it would. But, boy was I wrong! Less than two months after returning from Paris, I booked another solo European adventure—this time to Barcelona.

Now, lest you think Barcelona was #2 on my list, it wasn’t. Number two at the time was Italy. As I explained in a previous post (here) Barcelona was pretty darn low on my bucket list—but a few timely recommendations paired with a $440 round trip flight suddenly made this Spanish capital much more appealing. So, in May 2017, I went.

In typical Jayme fashion, I spent the weeks leading up to my trip in research and planning mode. The result was an itinerary that completely maximized my time and included all my top priorities. (I totally missed my calling as a travel agent. I swear!)

My overnight MIA-CLT-BCN flight arrived in Barcelona just after 11 am. Right on time. Unfortunately, it took over two hours of queuing to get through Customs—I think because it was a holiday??—which made me late checking in with my Airbnb host. I kept him updated on my ETA, though, and he was very understanding! Still, it was a bummer to waste those precious hours in the airport when I had soooo much city to see!

With my passport freshly stamped, I purchased a 72-hour unlimited metro pass from the airport kiosk (highly recommend this, or the 48-hour pass for short trips!) and hopped on for nearly an hour ride with several line changes. Thankfully, Barcelona’s metro system is easy to navigate—especially if you’re familiar with the Underground in London, or the Paris Metro. Of course, I am abnormally good with directions, but I also barely speak any Spanish… so that should even out, right??

Check in was painless at my Airbnb in the Poblenou district. After changing out of clothes I’d worn for almost 24 hours, I was finally free to explore Barcelona!! My first stop was the Encants Vells flea market, just a 10-minute walk from my apartment. If you love the thrill of the hunt for old, eclectic, unusual, random, or garage-sale-esque treasures, I think you’d like this place! I bought a tiny, carved stone elephant (my favorite animal!), the perfect present for my sister, and a few zippers (yes, zippers) to make zipper bracelets. Those purchases made it well worth my time.

Next stop, La Sagrada Familia. It was a quick 15-minute walk from the flea market, and it being Barcelona’s hottest attraction, I was itching for an up-close encounter! But, no photographs or distance views prepared me for the cathedral’s sheer mass and staggering height once I stood in its shadow and tipped my head all the way back to look up. The peculiar magnificence of this centuries-old-yet-still-unfinished structure was alluring! I crossed the street to a small park (Placa de Gaudi) just so I could see entire façade. (FYI: This park, with its small pond and lush greenery, is also ideal for less touristy, people-filled shots of the cathedral.)

After a quick spin around the park, I spent the next, oh, thirty minutes walking around the perimeter of Sagrada Familia. It takes up an entire city block, folks! With photos from basically every single angle of the exterior, I opted not to go inside due to lack of time. (Thanks, airport customs!) Do I regret this? My honest answer is no—mainly because I plan to return in ten years to see it completed, and because I didn’t care to pay the admission fee or wait in line with hundreds of other tourists all vying for the same (albeit amazing!) ceiling shots. So, I took one last look at Gaudi’s bizarrely beautiful creation, and kept on truckin’.

Twenty minutes later, I arrived at the Arc de Triomf. Having just experienced Paris’ Arc de Triomphe in January, I suppose I expected a similar vibe; however, I happily discovered that, although they share the same basic shape, the arches are as different as Paris is to Barcelona. Each truly matches its home city’s spirit and culture. Also, whereas the Paris Arc is encircled by highly trafficked roadway, Barcelona’s sits adjacent to a small traffic circle and serves as the gateway to a palm tree lined promenade leading to Ciutadella Park. Though the Arc does attract a tourist crowd, I spotted many runners and bikers in the mix, which made me like this place all the more. The less I feel like a tourist, the better!

Between Sagrada Familia and the Arc, I meant to stop at one of Gaudi’s famous casas—but completely forgot! So, I backtracked just a bit to Casa Batlló. I’d already decided not to pay to go inside (surprised??) but had to see the whimsically wavy façade with my own eyes. For all of five minutes. Often, that’s the only reason I add something to my itinerary—just to see it. In person. To make a real memory—even a quick one!—vs. living vicariously through others’ photographs. So, five minutes later I left, bound for my last stop of the day.

And guess what? This girl actually took the metro. Yup. I really did. But only because my destination was over a mile away and sunset was fast approaching. Floridian me was itching for a sunset at the shore. I was also famished, and quickly decided that dinner on the beach at sunset must happen. Also, dinner needed to be paella, because I have a thing about eating a few traditional dishes wherever I travel—and for Barcelona, I chose paella.

As luck would have it, Blue Beach Bar met my criteria—right on the beach with paella on the menu. I requested a table for one and wound up sitting just steps from the sand. It was bliss! I savored each and every morsel of that seafood paella as the salty breeze blew in a moody sunset. I lingered till dusk, then made my way down the beach for a 10-minute walk to my Poblenou apartment.

Once there, I spent the remainder of the night editing and uploading photos to Facebook, while checking in with friends and family back in the States. Then it was off to bed for an early start to Day 2 in Barcelona. Click here to read all about it!