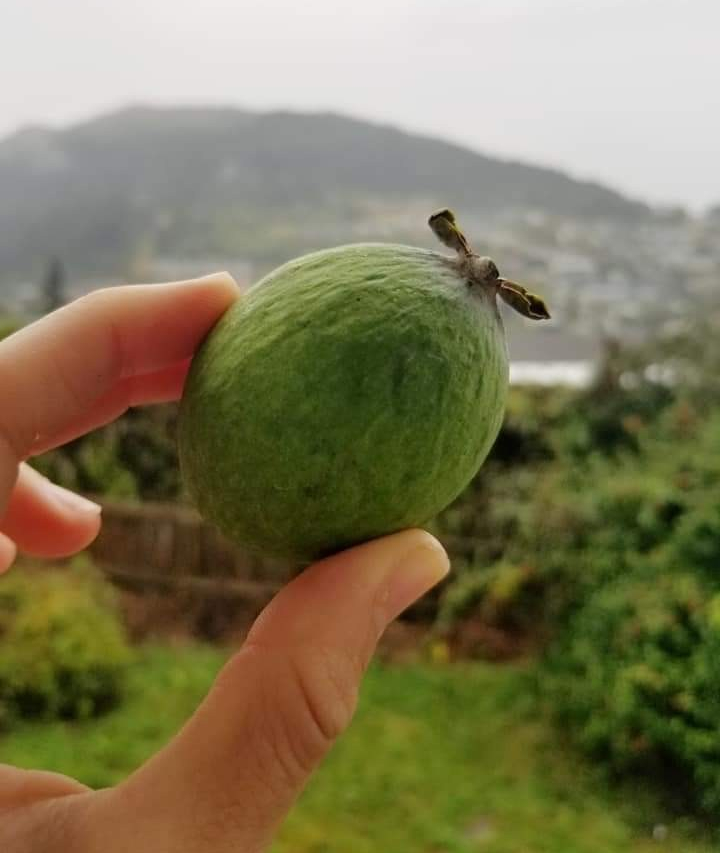 I’ll admit, I am not a foodie by ANY stretch of the imagination. In my everyday life, I tend to keep it pretty basic – as in, I rarely spend money eating out, and if a recipe has more than 5 ingredients, I start to lose interest. Not exaggerating.

Now, I will say that travel me is slightly more adventurous on the food scene. Eating at restaurants when traveling is a treat, and I make a point to try at least some of the local cuisine. But, wanna guess where I go immediately upon arriving almost anywhere?

Yup. I stock up on grab and go breakfast and lunch foods. Though, to be honest, I’ve also nuked the occasional dinner in an Airbnb microwave.

True story. The one night I spent in Rome, I ate grocery store deli pizza for dinner. Granted, I didn’t check into my Airbnb till nearly 8 pm, power walked my way around the city for a good three hours, then honestly did not feel like waiting for a meal at a restaurant. So yeah. Grocery store pizza. In ROME. No regrets. 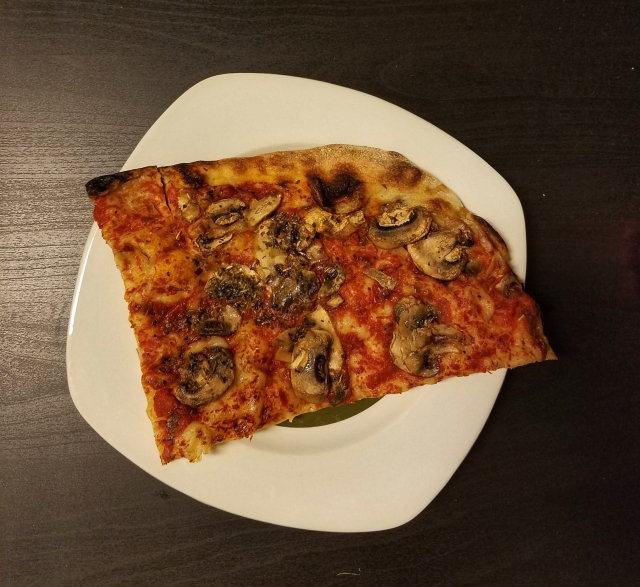 And if reading that just made you question my sanity… welllll, we prolly shouldn’t ever travel together. Just sayin’ 🙂

During my recent trip to Australia and New Zealand, I approached foodstuffs pretty much the same way I do on every trip – with a blend of grocery shopping, restaurant dining, and trying as many local foods as possible.

Please don’t think I’m about to give you a rundown of everything I ate in Oceana. I’m not. Instead, I’ll only dish on the local cuisine I taste-tested. So, if you’ve got these countries on your list, or you’re an actual foodie, OR you’re just remotely hungry… read on.

Grilled Kangaroo: I took the ferry across Sydney Harbor to Manly one night and ordered a kangaroo steak at Manly Grill – and I had mixed feelings. Pro? The slightly sweet, gamey taste. Con? Though cooked medium rare, it was a tough cut o’ meat. 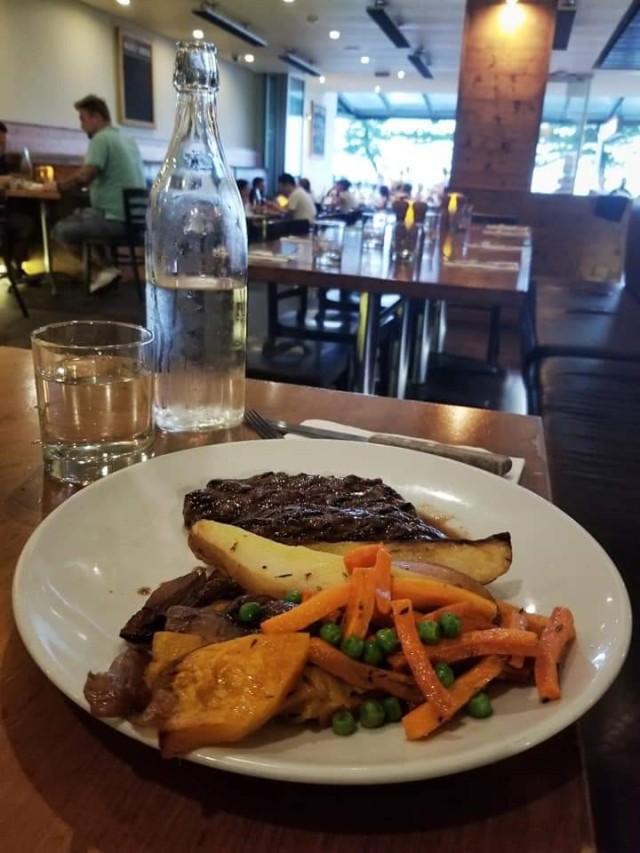 Raw Octopus: I’ve eaten octopus before, but never raw. So, what better place to try it than the Sydney Fish Market, straight off the boat? Well, that’s what I decided after looking over literally ALL the seafood options at the market. The squid spoke to me. I even watched a tentacle being cut to pieces just for me. Taste and texture-wise, it reminded me of chunk style imitation crab. Prolly not the strongest selling point, but I happen to like imitation crab, so… 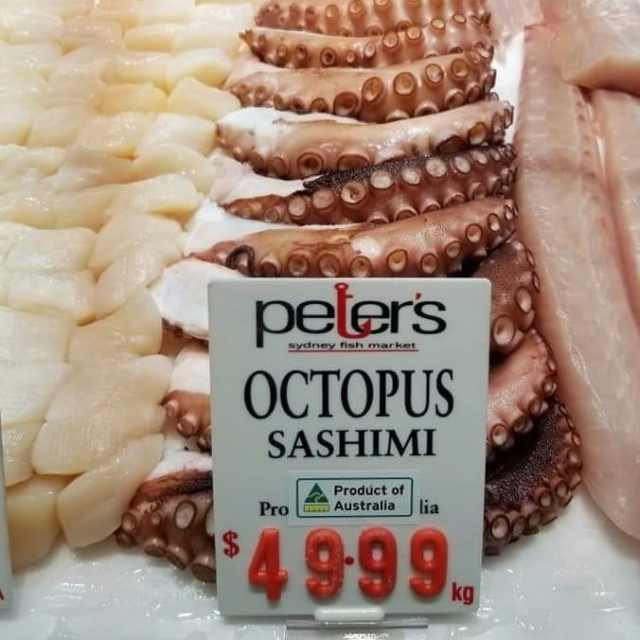 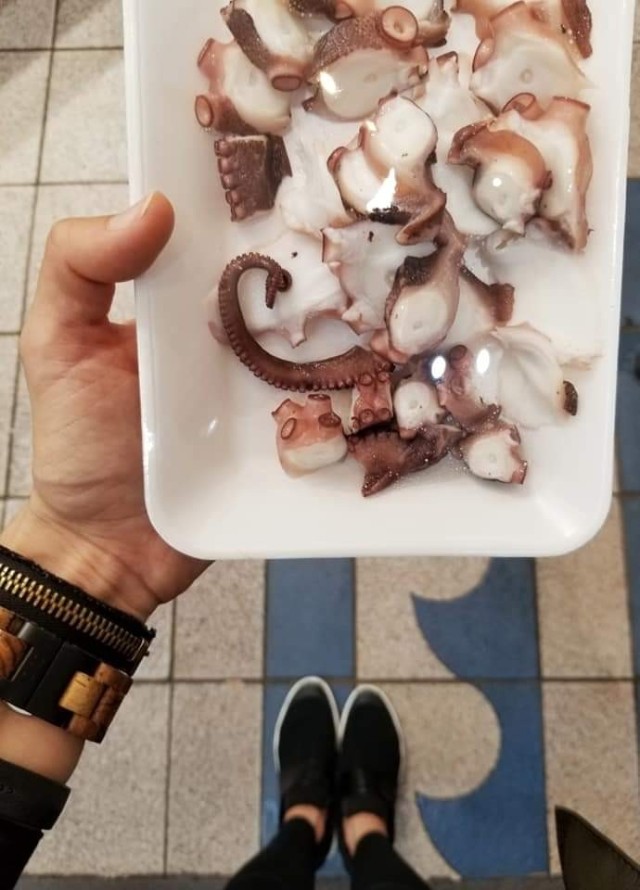 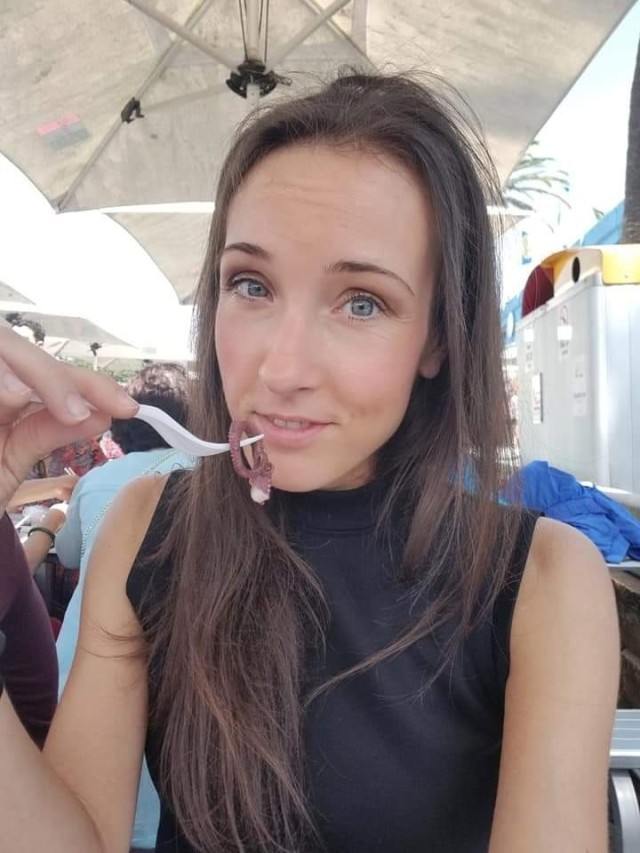 Kit Kat Gold: Aptly named, because this Kit Kat is a winner. It’s like the O.G. Kit Kat, but with a caramel-flavored coating. Game changer. But, apparently only available in Australia. Whyyyy? 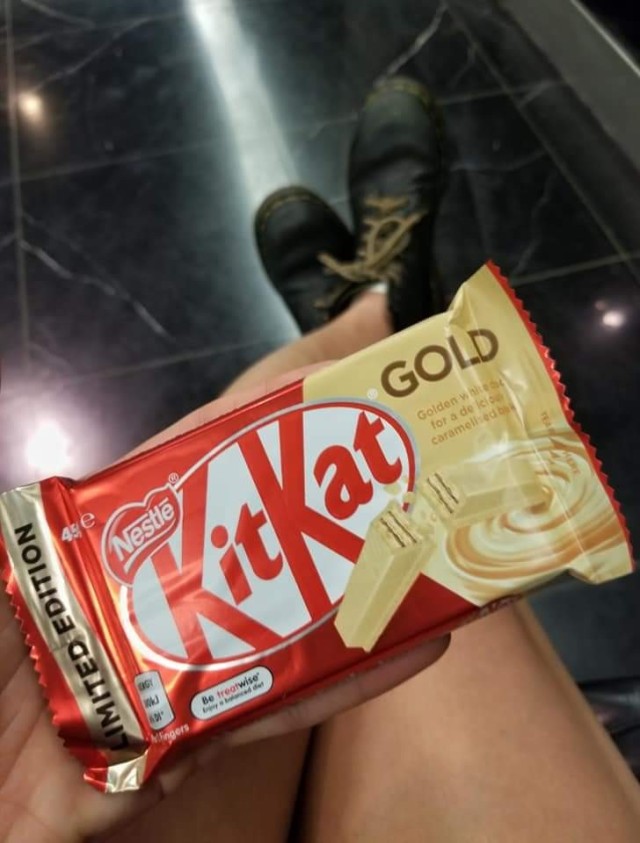 Kit Kat Caramel Pretzel: Another Aussie-only Kit Kat. Each piece of the bar is one half caramel, one half chocolate-pretzel, for a dual-flavored experience with every stick. I even got a waft of pretzel smell when I opened the package. Not as drool worthy as the Kit Kat Gold, but I’m a fan. 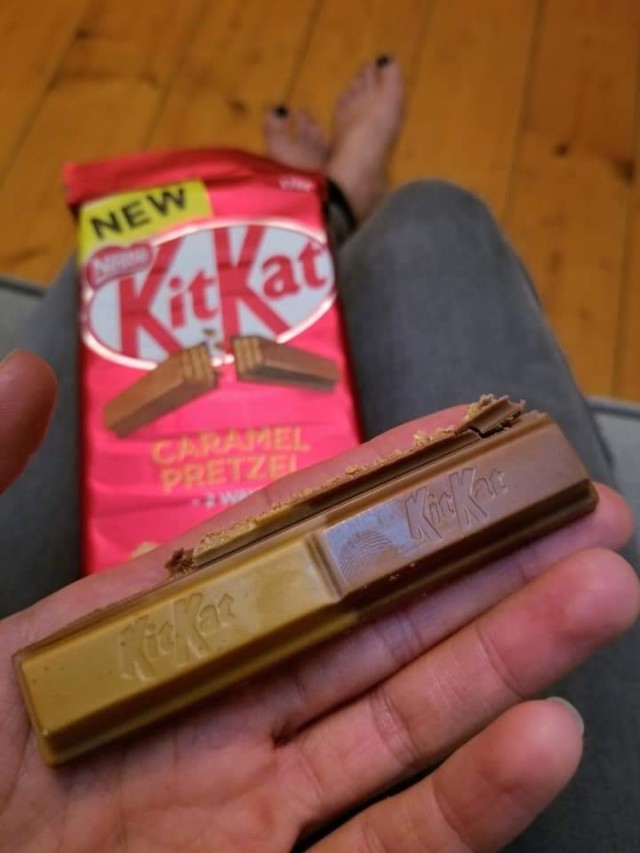 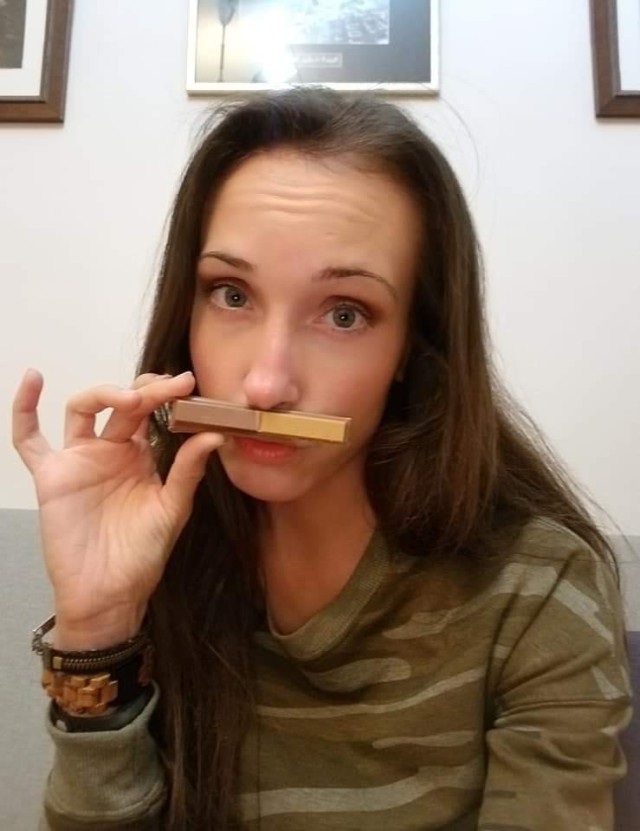 Vegemite: I bought a small jar but didn’t end up tasting it till I was back home in Florida. And then I made the mistake of trying it straight out of the jar with a spoon. Holyyyy sodium. Imagine soy sauce in gel form and 100x saltier. This stuff ain’t bad but needs to be spread thin on something bland. 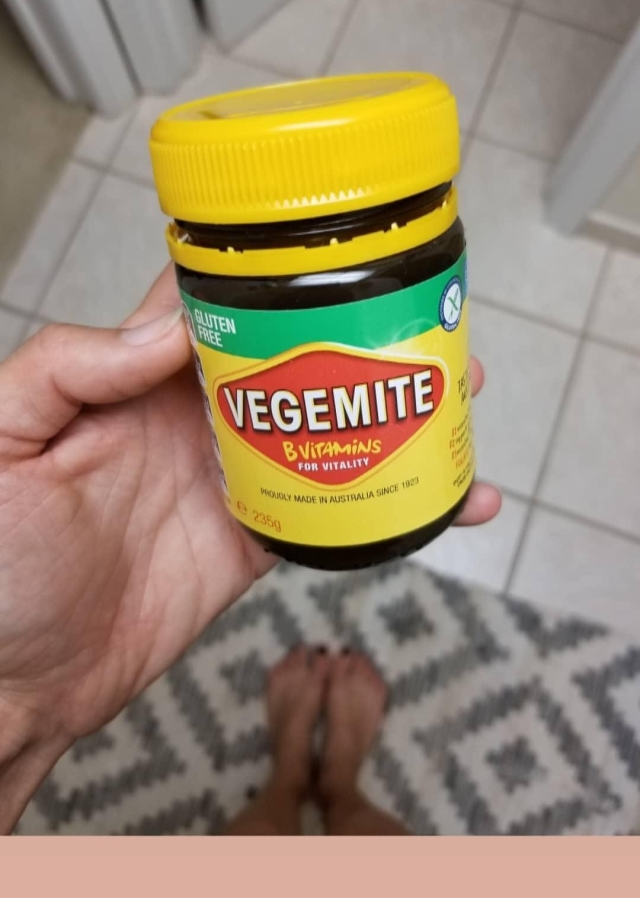 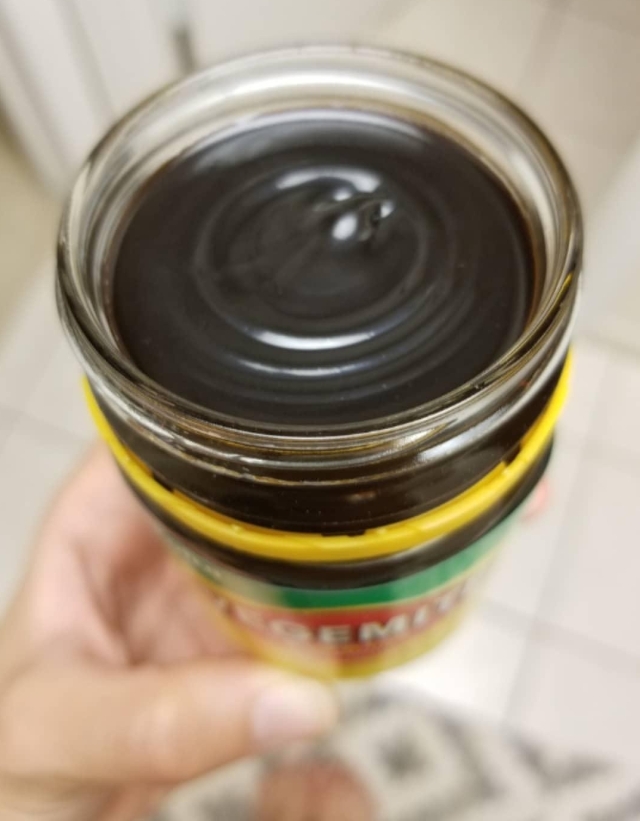 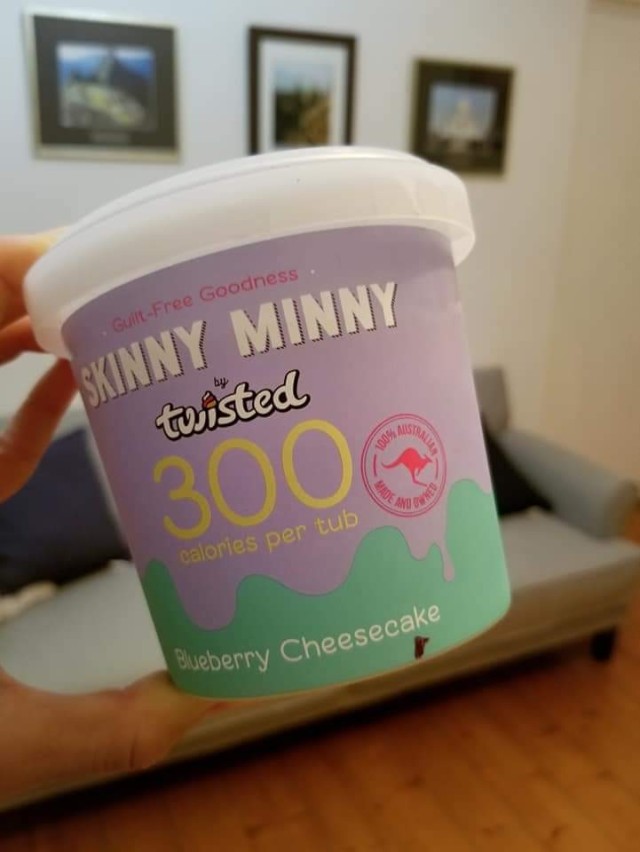 Fantales: I’m a caramel-loving gal, so I had high hopes for these popular Australian candies. Sadly, I was disappointed. The caramel center was so tough I almost gave up trying to chew it. I dunno about you, but I like my caramels soft. 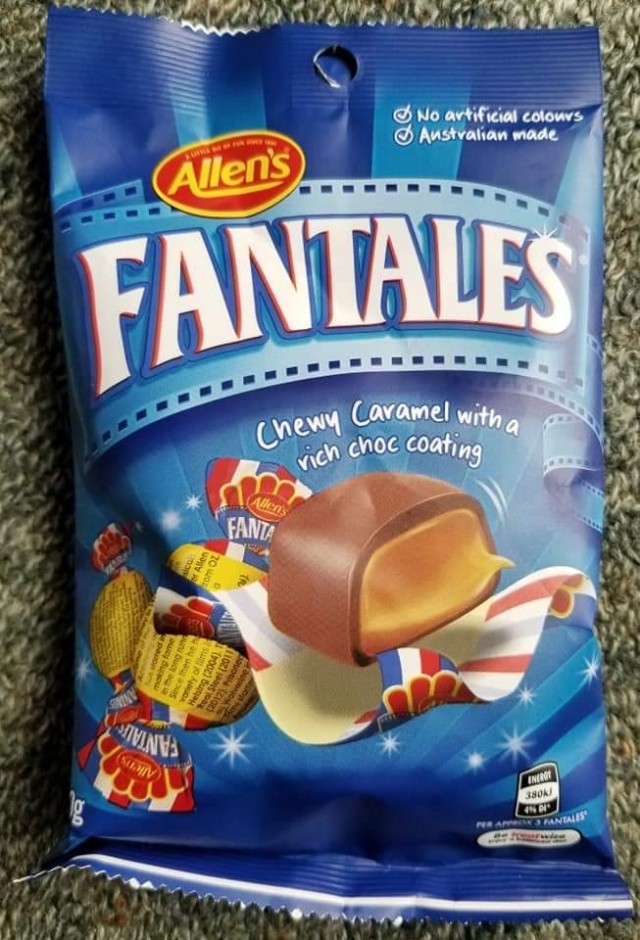 Alrighty. On to Queenstown, NZ.

Green-lipped mussels: To me, these didn’t taste any different than other mussels I’ve tried. If you like mussels, you’ll like these. And, most restaurants serve them with grilled bread. Yes, please! 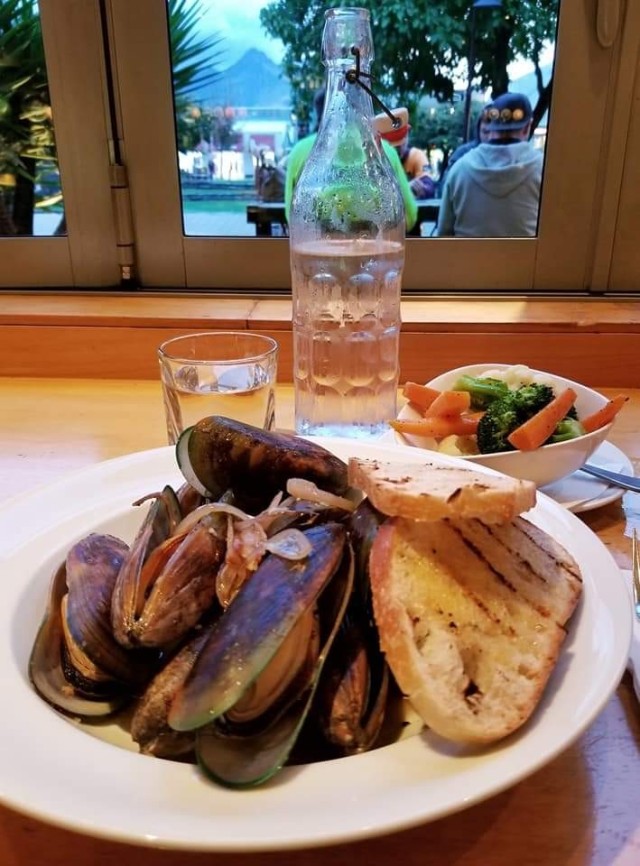 Kumara: Aka. New Zealand’s own variety of sweet potato. I found kumara spirals at the grocery store on my first night and I wanted to do a little dance in the deli aisle. Back at the Airbnb, I popped ‘em in the microwave as a side dish for dinner. Taste-wise, they fall somewhere in between a red potato and a regular sweet potato. I think. The important thing is, they’re potatoes. And potatoes are gooooood.

Feijoa: Okay. This fruit was NOT what I expected at all. And I mean that in the best way! The description I read online was: tropical fruit with a kiwi texture – and I love kiwi. But friends, feijoas > kiwis. Like, so. much. greater. First, you can bite right into them. The skin is thick, but soft. And the inside. Ohhhh the inside. It’s both sweeter AND juicier than a kiwi. Hey, Whole Foods? Can you start importing these, STAT? 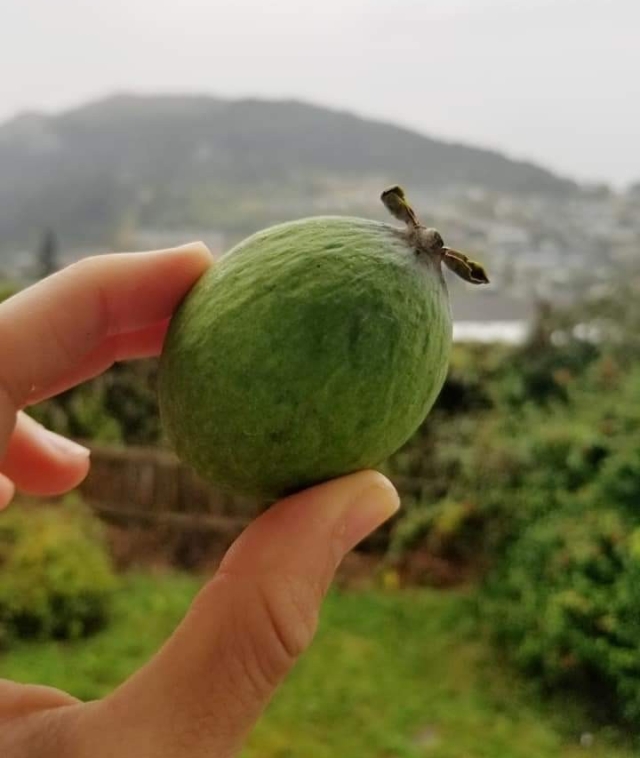 Lemonade apple: Yes. This is a real apple variety. I was all set to buy my go-to Granny Smiths. Then, whaaaaa?? The moment my eyes read “lemonade apple,” I abandoned those Grannies. Into the produce bag went the yellow apples. I had to know if they lived up to the name. And, by golly. I did taste a hint of lemon! 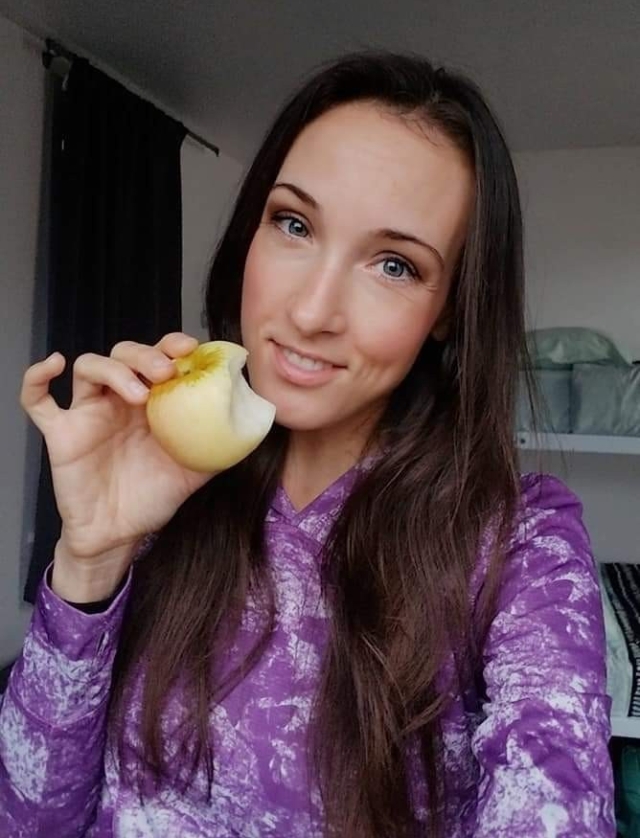 Hokey Pokey ice cream: Try the hokey pokey ice cream in New Zealand, they said. So I did. And guess what? “They” were right. I figured it had to be good. I mean, it’s ICE CREAM. But good would be a serious understatement. This cup o’ frozen goodness was heaven.

So, what is hokey pokey ice cream? Well, friends. It’s a sweet vanilla base studded with caramelized honeycomb and ribbons of New Zealand’s acclaimed honey. Winnie the Pooh would risk bee stings for this stuff. I swear. 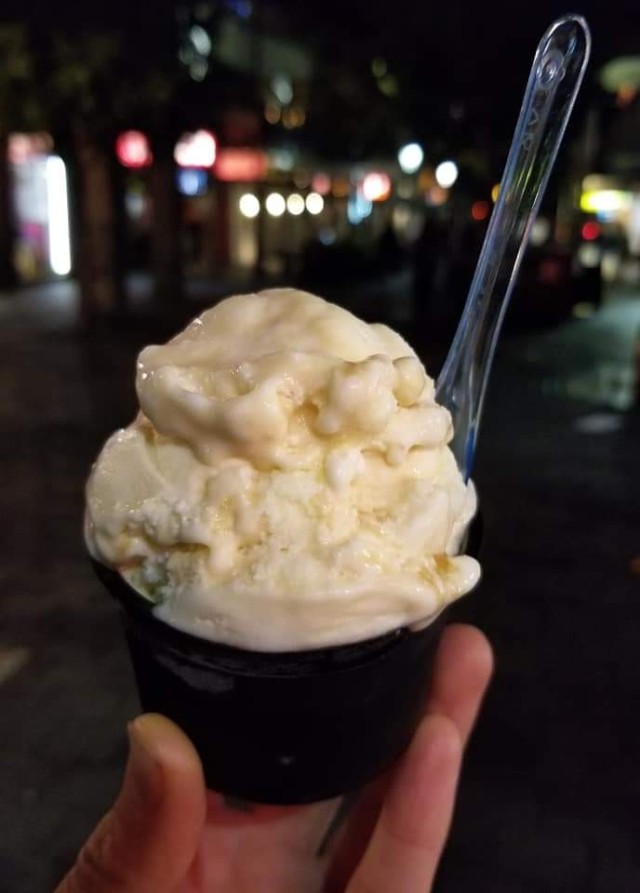 Whittaker’s hokey pokey chocolate block: New Zealand LOVES Whittaker’s – especially the peanut slab. I had to try the hokey pokey, though. I mean, c’mon. Bits of crisp honeycomb in a thick ol’ block of chocolate? It was like Nestle’s Crunch on steroids.

Manuka honey chocolates: As you may have gathered, honey is a BIG DEAL in New Zealand, with Manuka honey reigning supreme. Unfortunately, Manuka honey is also quite expensive; so, instead of buying a jar of it, I opted for a cheap box of honey-filled chocolates. The bold, sweet honey paired so well with the milk chocolate that I now wonder why these aren’t included in all boxes of chocolate? 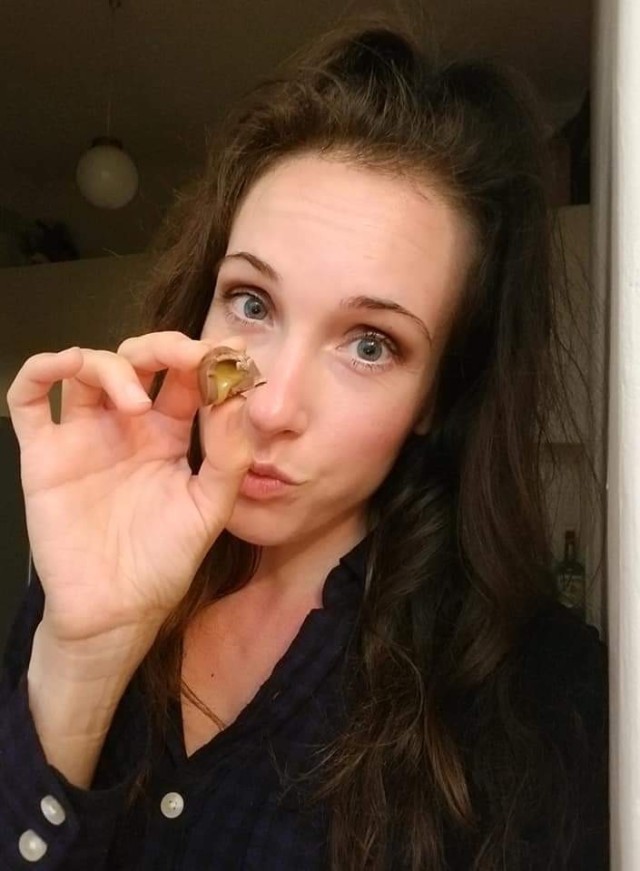 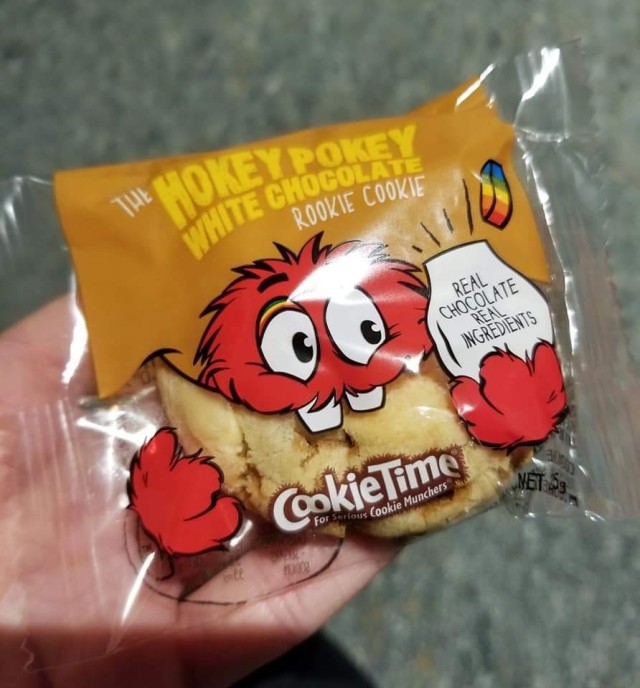 Cadbury chocolate fish: I honestly didn’t have high hopes for these chocolate-covered, raspberry marshmallows shaped like fish. Research told me they were a must-try, but I was skeptical. I mean, I figured they’d taste good, but why all the hype? Admittedly, I ate my words. What can I say? The flavor combo and textures work surprisingly well together, and the fish shape only adds to the appeal. Eat you some fishies in NZ. 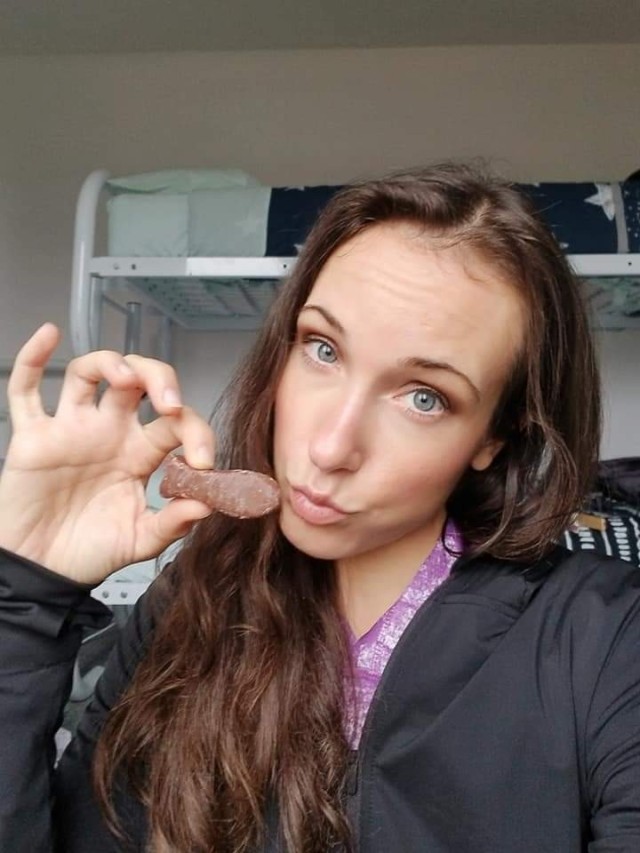 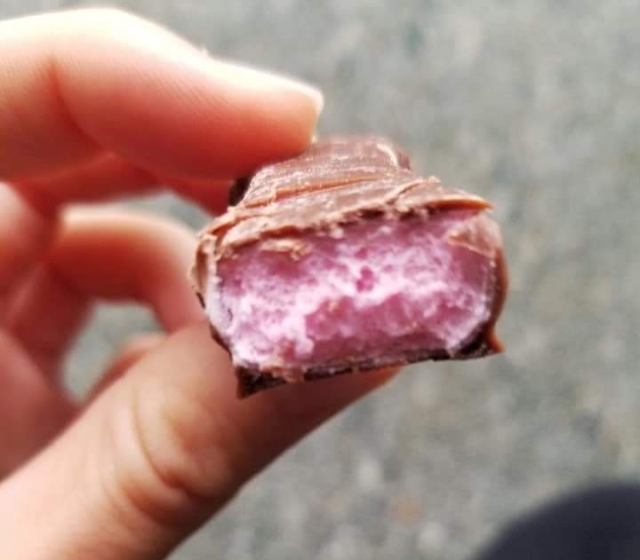 Pascall pineapple lumps: A New Zealand fave. Also chocolate-covered. I actually did have high hopes for these babies, thinking they were dried pineapple pieces dipped in chocolate. So, when I bit into one and the center was a soft, chewy, pineapple-flavored center – well, it was sorta like gulping what you thought was a smoothie, then discovering, mid sip, that it’s root beer. And root beer is good. Don’t get me wrong. But not what you expected.

Are you hungry now? Which of these would you be most eager to try?