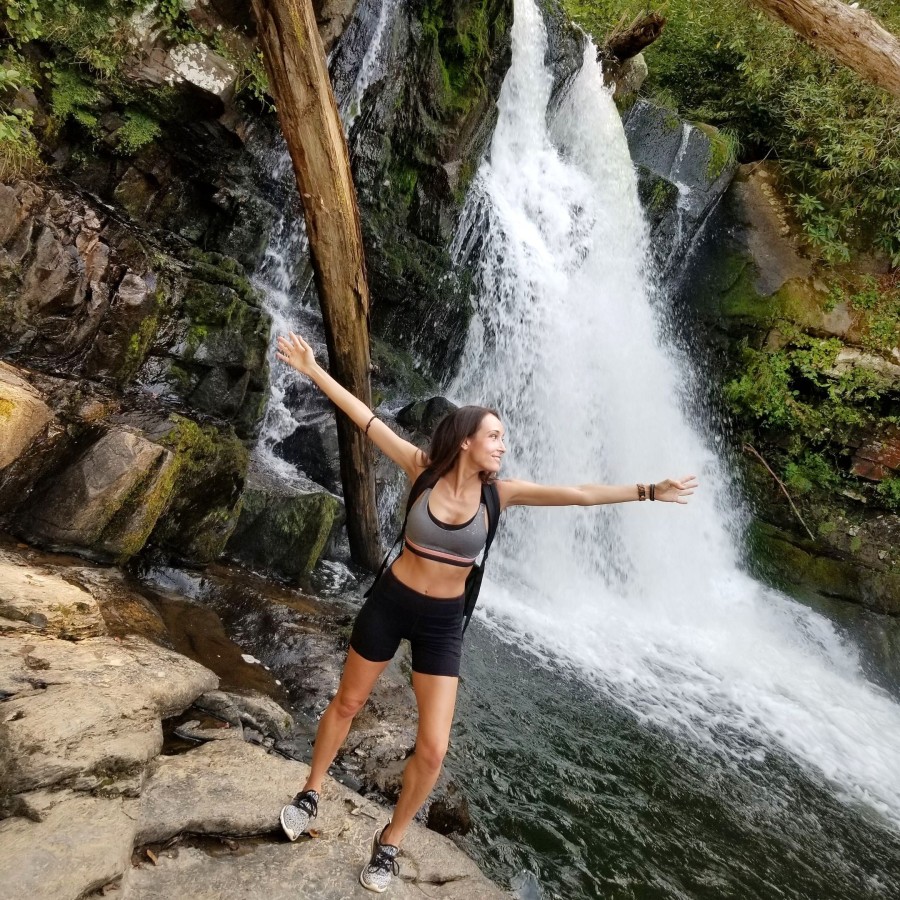 After 5+ years of being a Florida girl, I traded the beach for the mountains. And honestly, I’m sitting here thinking, What took me so long?!

Tennessee is a state for adventurers. A state where—after just a few short weeks—I already feel like I belong.

Though I’m eager to explore the heck outta Knoxville, I’ve also been salivating over hiking in the Smokies, so I took a spontaneous trip to find waterfalls in Cades Cove. Abrams Falls, to be specific.

A bit o’ Googling told me it was a 5-mile roundtrip hike. Moderate difficulty. Three to four hours. Perfect for a Sunday afternoon adventure, I concluded. So, off I went.

The drive from Knoxville was quick. Just over an hour. However, once I reached Cades Cove, traffic got slowwwwww. I’d read about the Cades Cove 11-mile loop road, but didn’t realize it was one-way, one lane. No passing unless a driver ahead of you voluntarily pulls over to stop.

I joined the caravan of vehicles, and counter-clockwised my way around the scenic loop. I think a tortoise and a snail passed me. And even while surrounded by majestic Smoky views, I went a bit stir crazy because all I wanted was to be out. of. my. car. and. out. in. the. nature. Hellooooo lesson on patience.

Cades Cove has all these numbered pullover spots, and the road to the parking area for Abrams Falls is just after pullover #10, on the righthand side. Can’t miss it. There’s ample parking and a restroom facility; however, the doors were locked, and it was midday on a Sunday – so maybe don’t plan on that being available if you hike here.

But alright. On to the hike itself.

The trail starts at a footbridge near the parking lot and stays at river level for about a mile. Maybe? Idunno. I wasn’t tracking it. Then, at some point midway into the hike, the incline gets a little serious. Nothing crazy. I mean, I saw kids under 10 hiking with their parents. But, it’ll wake up your glutes, taking you high above the river till the water’s out of view and you can only hear the faint rushing current down below.

Honestly, though, much of the second half of the hike felt downhill—so much so that I recall thinking, Ooohhhhkayyyy. The return hike to the car’s gonna be funnnnnn. (Did you catch the sarcasm there? Also, spoiler alert: the way back wasn’t so bad.)

So anyway, after about 2.5 miles of trail that included four of these log bridges, I caught my first sight of the waterfall. And friends, it’s purdy. Picturesque. Majestic even—in a medium-sized kinda way. But here. Lemme stop describing it and just show you…

Ya see? Purdy, right? Worth the hike.

I waited my turn for a close look at the falls. It wasn’t exactly crowded, but not secluded either—and I prefer shots without a bunch of people in ‘em. So, I held back and took some self-timer shots with the falls in the distance. That is, till a woman approached and offered to snap some photos for me. Gosh, I love the kindness of strangers!

So, I’m doing this thing now where—when a stranger offers to take my photo (because I never ask anyone myself)—I ask them to take shots rapid-fire while I move around and act silly. Thankfully, this sweet lady didn’t act like that was an odd request, and she took several shots in about a 15-second span.

When I did finally have my turn at the base of the waterfall, I offered to take photos for a couple in front of me, and they kindly reciprocated. And, about 15 seconds later I had a LOT of amazing photos. Stranger #2, you aced it!

After that second photo sesh, I set off on the return hike. As I spoilt above, the uphill was fine. Oh, I was breathing heavy and my bum was burning. Sure. But overall, the difficulty of this hike is indeed moderate—and more on the low side.

I was also pleasantly surprised that the roundtrip hike only took me 1.5 hours, not 3 to 4 as I’d read online. Of course, that’s not accounting for my time spent at the waterfall; but still, if you’re accustomed to hiking or in decent shape, the hike itself is easily completable in under 2 hours. Just don’t expect the drive on that Cades Cove loop road to be speedier than expected—especially if you visit on a weekend!

So that’s Abrams Falls. A beaut for sure! I’m officially hooked on waterfall adventures in Tennessee. Till the next one…